Venice is much too old for its own good. It’s falling apart, it’s sinking, it’s population is dwindling, it’s overrun with tourists, it’s swamped with monster cruise ships, it’s buildings are largely dilapidated, it’s glory as an empire has been in decline for half a millennium, it’s a caricature of itself, it often smells bad, yet, it’s a glorious city-state with matchless charm, mystery, art, food, music, architecture, color, history, ambiance, and enchantment; a good place to go to die (but not Thomas Mann’s version in Death in Venice, more like Henry James The Wings of the Dove way of passing), or have a clandestine affair with a Dangerous Beauty, or, as I do, prowl around the backsides, the undersides, the places tourists don’t want to invest time walking to, the tiny neighborhoods that zigzag around one crazy blind corner after another.

I love that part of Venice. The big island, so to speak, the biggest of the 117 islets that constitute Venezia. Around the corners, past the restaurants, across a maze of bridges, 409 bridges in all that cross the 177 canals, perhaps the biggest labyrinth in the world, if not now, a billion centuries ago when Marco Polo departed for China, and points East. It’s easy to loose one’s bearings, passageways are often tight, buildings loom above, and no alley runs more than fifty feet before dead ending into a brick wall necessitating a ninety degree turn left or right, there is always a choice but not always a marker to lead one back to San Marco, or the Rialto, or Harry’s Bar. 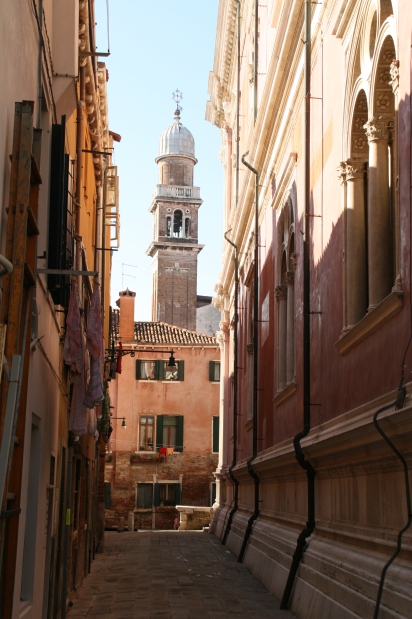 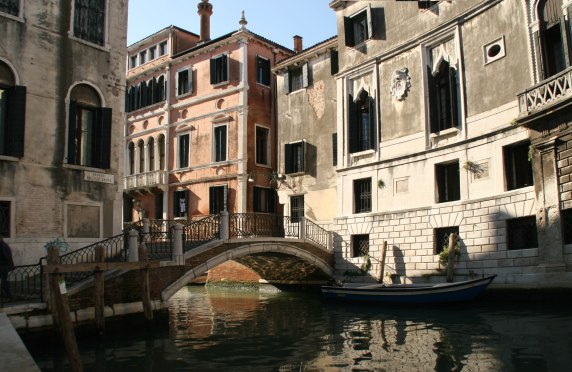 In those deep recesses of antiquity, scents and sounds abound, echoing, caroming, bouncing off walls and doorways, sliding across still canals, and creeping ever so silently from behind penetrating your soul. You swear there is someone just ahead of you, as you round a corner, a flash of a sleeve or boot or skirt disappears around the next corner, and the next, cajoling, teasing, or is that sound behind you? Night plays tricks on the senses, faint noises are amplified, it’s surround-sound from unidentified sources. Then, the sweet scents of dinners being prepared descend like a cloudburst: baked cheese, roasted lamb, bread, sweet desserts.

There are little piazzas, tiny parks here and there, with a tree or two, benches where neighbors chatter, kids play, dogs and cats bask in the sun, old ladies parade in well-worn black coats regardless of temperature, the opposite side of the city where Armani, Paciotti, Cavallini, and Prada hawk their wares to the ricca e bella, but back on our side, where real Venetians survive on tourist’s euros except for the expat writer, painter, composer, or dreamer, existence is mellower, aged well beyond perfection, but not quite putrefaction, more an elegant state of petrification that will linger on for another score of centuries. At least, I hope so.