A mid November visit to Jamaica Plain, that Boston neighborhood whose origin dates back to the early seventeenth century, was a brisk affair with early morning temperatures hovering just above freezing. I walked the two blocks from Taylor House to the Jamaica Pond, which is part of the Emerald Necklace of parks and waterways designed by Fredrick Law Olmstead in the late nineteenth century.

Breezes across the sixty-some acre pond nearly took my California breath away. I brought gloves, thin as they were, and a scarf but no hat or ear muffs. The path around the pond was about a mile and half. I walked briskly and watched my breath vaporize in the chill morning. My pace slackened when I hit a sunny part of the path, quickened when in shade. On the east side of the pond, a small tree grew near the shoreline. I noted the winter fruit on a tree I didn’t recognize. Then I noticed a tiny nest perched in the dendritic branches. 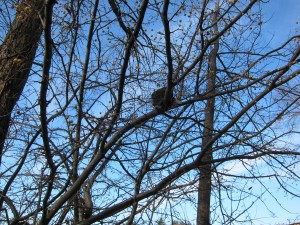 The nest was deserted, a summer home for the eastern Kingbird, Black and White Warbler or a Myrtle Warbler’s family. The nest was too exposed for current occupation but was abstractly beautiful with the dangling winter fruit set against the sapphire sky.

Spent the afternoon at the New England Aquarium gazing at penguins and fish. I am a big fan of being on the dry side of the glass. Sea life is spectacular though and an aquarium gives a good, albeit minuscule, synopsis of what lurks down under.

That evening, I was guest of a prominent Boston architect who prepared a sumptuous salmon dinner.

3 lbs. Salmon of your choice, rinsed and dried

2 or 3 julienned carrots and zucchini

Clippings of thyme and oregano

Cut a large piece of parchment paper and set salmon at one-third point of sheet.

Arrange carrots, shallot and mushrooms artfully atop salmon and drizzle with olive oil.

Fold parchment over salmon, creating an envelope with crimped edges and leaving one corner slightly open.  If you aren’t an origami expert, don’t be afraid to staple the edges.

Blow into open corner to inflate the envelope and then seal the corner.

Place in oven and cook until done about 15-20 minutes.

Remove from the oven, cut open the parchment, remove the herb stems and drizzle with more olive oil.

Let your guests admire your creation before serving.